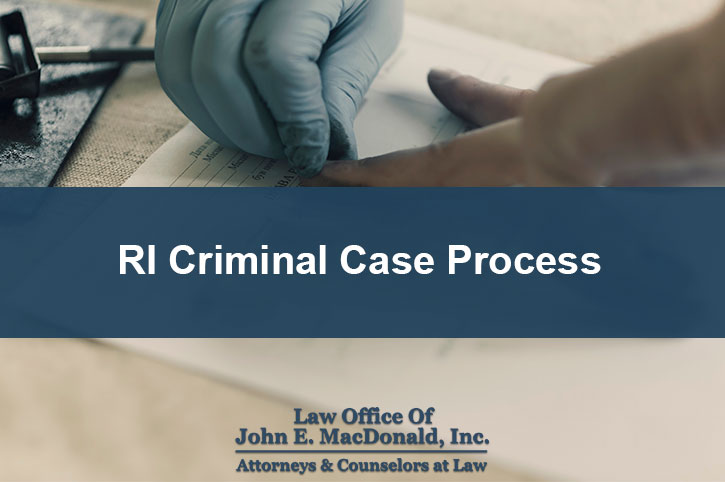 What Happens After You’re Arrested in Rhode Island

If you’ve been charged with a crime in RI, it’s normal to feel a whirlwind of emotions. Fear, anxiety, and even anger are all common reactions. But if you go into this process blind, your emotions can work against you. That’s why it’s so important to understand the Rhode Island criminal process. Read on to learn what to expect after your arrest in RI, and what you can do to prepare.

How Do Rhode Island Courts Work?

In RI, we have district courts and Superior Courts. All trials for misdemeanors are held at district court. This includes crimes like assault, disorderly conduct, and driving under the influence (DUI). Capital felony and non-capital felony cases are heard at superior court. This includes crimes such as first-degree robbery, breaking and entering (B&E), and drug possession.

There are 4 district courts and 4 superior courts in RI. Newport County, Kent County, Washington County, and Providence County have one of each. If your case goes to trial, it’ll be held in the county where the crime occurred.

What is the Process for a Criminal Case in Rhode Island?

The process for a criminal case in RI can comprise of following steps, depending on the nature of your case:

1. After the Arrest: Arraignment

You’ll have an arraignment in district court. After your arrest, you’re given a date for your mandatory court appearance. At the arraignment, you’ll be:

At the arraignment, bail determinations are made to release or hold the defendant.

Whether you’re facing misdemeanor or felony charges, next you’ll attend a pre-trial hearing. This is normally scheduled for 2-3 weeks after the arraignment. At this meeting, the prosecution must provide any evidence relevant to your case– even if it helps you. You and your lawyer must also disclose all relevant information to the prosecution.

After the pre-trial hearing, both sides are granted a discovery period. You’re able to gather and review relevant materials, formulate a defense strategy, and hire an investigator or any other useful professionals. This is when you and your lawyer will craft your custom defense strategy.

The defense files motions to dismiss or suppress evidence, or to prevent them from being used at trial. In many cases, certain pretrial motions can lead to the dismissal of the case.

In many cases, the government will offer a plea deal to avoid trial if the defendant will admit guilt. Which in turn will waive the rights that come with a trial. If a plea agreement is accepted by the defendant, the next step will be sentencing.

The prosecution and your lawyer will each present their evidence to a judge, and potentially a jury depending on your case. You may be given the choice of whether or not to appear before a jury. A jury may find you to not be guilty, but their decision must be unanimous. Your lawyer will advise you on the best path forward.

Once your plea agreement or trial is complete, you’ll be sentenced. The courts in RI always consider recommendations from both involved parties, the advisory sentencing guidelines, and the maximum possible sentence before making a decision. But this isn’t necessarily the end of the line for you.

After your sentencing, you and your lawyer have the right to appeal the sentence. You must file a notice of appeal within 10 days of when your judgment date is officially recorded. When you file an appeal, you’re asking a higher court to examine the details of the trial. Ideally, a higher court will find an error or violation of your rights which warrants a new trial in Superior Court.

At the Law Office of John E. MacDonald, Inc., we’re dedicated to being available to you throughout the entire legal process. When you work with us, you can rest easy knowing we’ll explore every potential avenue for your defense. You’ll have us by your side every step of the way.

From your arrest to your court dates to the appeal process, your case is our priority. Invest in your future today by calling for a free case evaluation at (401) 421-1440.

What Happens at an Arraignment in RI?

At an arraignment in Rhode Island, you’ll be brought before a judge for a formal listing of the charges against you. Most often, we recommend our clients enter a plea of “not guilty” at their arraignments. But every case is unique, and we’ll make custom recommendations depending on the details of yours.

Once your plea is recorded, you’ll be given a date for your pre-trial conference. Finally, the judge will set bail, or you’ll be conditionally released until the date of your conference.

The Criminal Case Process for Misdemeanor Charges in RI

If you have been arrested for a misdemeanor in RI, you’ll be taken to a police station and your information will be recorded. This includes personal info like name and address, taking photographs, and recording fingerprints. You’ll also receive a date for your arraignment.

It’s crucial to remember that you have the right to an attorney. At the same time, you don’t want just any attorney. You need somebody who’s familiar and experienced with the RI legal system, like the Law Office of John E. MacDonald. With over 25 years of experience in criminal defense, we’ve successfully defended hundreds of cases in Rhode Island District Court.

Typically, an arraignment is the second step in the RI criminal process. You’ll appear before a judge for a formal reading of the charges and to record your plea. The way you plead affects the potential outcome of your case, so it’s in your best interest to attend with your attorney. Bail determinations are made and the date of your pre-trial conference will also be chosen at the arraignment.

A few weeks after the arraignment, you and your attorney will meet for the pre-trial conference. Law enforcement will supply documentation of the evidence they have, like witness statements and the police report. With this information in hand, you and your attorney can prepare a strong defense strategy and start negotiating a resolution.

4. If Both Sides Can’t Agree on a Resolution

Even after multiple conferences—you’ll go to trial. This follows the usual flow of a trial. The state/city lays out the evidence against you, and your attorney advocates on your behalf. Once both sides have had their say, the judge makes their verdict.

5. If You’re Guilty Despite Your Defense Strategy

You have the right to appeal. This involves scheduling a fresh proceeding with the superior court. Your case gets a new case number, and everything starts over like the original trial didn’t happen. The goal of an appeal is to win a more favorable outcome than the district court gave you.

The Criminal Case Process For Felony Charges in Rhode Island

If you’re arrested for a felony in RI, you’ll appear before a District Court Judge for your initial appearance or arraignment. We normally recommend that clients plead “not guilty,” at which point the judge makes your bail determinations, which can be:

Before referring the case to Superior Court the District Court will conduct a bail hearing to make the final bail determination.

Your felony charges can be filed in 1 of 3 different ways.

In this scenario, grand jurors are randomly selected. The prosecution or AG’s office presents the evidence against you, and the grand jury reviews it in secrecy.

If they vote to indict you, the indictment is formally filed in Superior Court and your case proceeds. If they don’t, your case is closed without any additional prosecution.

The second way is called the criminal information process. In this situation, usually the law enforcement agency which ran the investigation against you presents their case to the Rhode Island Attorney General’s office.

The AG’s office reviews all the presented materials and makes the determination on probable cause. If they believe it exists, they’ll sign your indictment and formally file it with the Superior Court. You are officially charged with the crimes in question.

But if the AG doesn’t see probable cause, you’re discharged from any additional prosecution.

Finally, you may choose to voluntarily waive your right to the criminal information process and indictment. This typically happens when you’ve reached an agreement before your charges move from District Court to Superior Court, and you’re looking to expedite the process.

But it can also happen if you violate your Superior Court probation or if new, additional charges are filed in District Court.

If your case isn’t dismissed and you go to trial without reaching any kind of plea agreement, you and your lawyer will employ your defense strategy. The trial is a very structured process where both sides present evidence to either a jury or a judge without a jury.

As part of your defense, you and your lawyer can challenge any presented evidence and cross-examine witnesses. The prosecution will do the same with any witnesses or evidence you present.

Once all evidence has been presented and rebuttals are complete, both sides make closing arguments. The jury (or judge, if you don’t have a jury) will issue a verdict.

When the judge imposes their sentence, they’ll consider the advisory sentencing range, the maximum punishment possible, and any other factors related to the law.

Your sentence isn’t necessarily the end of the road. You can appeal your sentence or conviction just by filing a notice of appeal. But you only have 10 days from the date your judgment is entered.

When you file an appeal, you’re asking a higher court for a review of your trial and to check for errors or violations of your rights.

If you’ve been arrested in RI and charged with a misdemeanor or felony, the Law Office of John E. MacDonald is here to help. With 25+ years of experience successfully defending cases like yours, we’re experts in navigating the Rhode Island legal system. Most importantly, we’re available 24/7 because we know arrests don’t exclusively happen during business hours.

Pre-trial Conference in Rhode Island – Everything You Need to Know

What is a Capital Felony in Rhode Island?