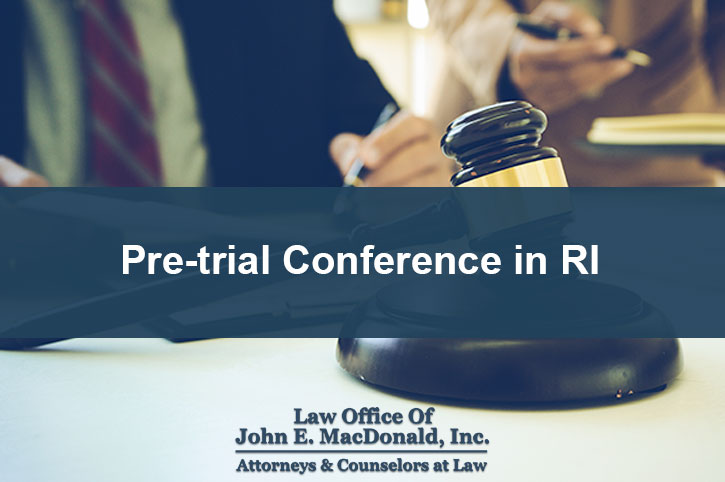 What is a pre-trial conference?

A pre-trial conference is when law enforcement and the prosecution display all their evidence against the defendant. The defendant and their criminal defense attorney will review all of these materials together and create a defense strategy.

When does a pre-trial conference happen?

The pre-trial conference happens in the middle of the criminal justice process. First, those accused of a crime will face an initial arrest and be processed at a local police station. This is when they’re given the right to contact an attorney. Typically within 48-72 hours of an arrest, the defendant will appear at an arraignment hearing.

What is presented at a pre-trial conference?

The prosecution is obligated to present every piece of evidence that they have against the defendant. This typically involves things like police reports, witness statements, lab reports, security footage, and other pertinent information regarding the criminal charges. The defense attorney will review each piece of evidence and work closely with the defendant to build a defense plan or determine if there’s a reason to have the case dropped or dismissed. Beyond reviewing the evidence, the pre-trial conference is also when the defense and the prosecution identify any facts in dispute and explore any other options before moving forward with a trial.

How long does the pre-trial conference last?

What should I do to prepare for a pre-trial conference?

To prepare for your pretrial conference, the first thing you should do is call your defense attorney. They can guide you on moving forward, what the pretrial timeline will look like, and what information they’ll need from you.

It’s also highly advised to reflect on the incident and the day of the arrest and write down every detail you remember. For example, were there any witnesses? Did you speak to anyone? Did anyone share information with you? Where did it take place? What was the time of day?

It’s also important to review the police report closely and ensure that everything is accurate. Your defense attorney will depend on you to remember specifics and be as honest and open as possible about your arrest. When it comes to the pre-trial conference phase, every detail matters.

Should I take a plea deal if it’s offered at the pre-trial stage?

The pre-trial conference is when every factor of the case is reviewed to determine if it’s appropriate to move forward with a trial. Any alternative options should be discussed with your criminal defense attorney. While it will be up to you to make the final decision on accepting a plea agreement, an experienced defense lawyer will be able to help you understand if the plea deal is worth it, or if you’re better suited to move on to a trial.

Your defense lawyer can also negotiate the terms of a deal based on the evidence presented, or push for the case to be dismissed if they believe there’s not enough evidence to prosecute. Attorneys on both sides are often eager to reach an agreement instead of spending time, money, and resources at a trial, so exploring every possibility at the pre-trial conference stage is essential.

What are factors to consider when deciding on a plea deal?

Plea deals vary depending on the defendant’s criminal history, the severity of the charges, and the evidence collected. When deciding if you’ll accept a plea deal, one of the most important factors to consider is the sentence you’ll face if you’re found guilty at a trial. It’s also wise to consider your employment, family, finances, and how a conviction could affect things like loans, leases, or parental obligations.

If you’re charged with a crime, it’s important to understand what happens at the pre-trial…

If you’re charged with a crime, it’s important to understand what happens at the pre-trial…