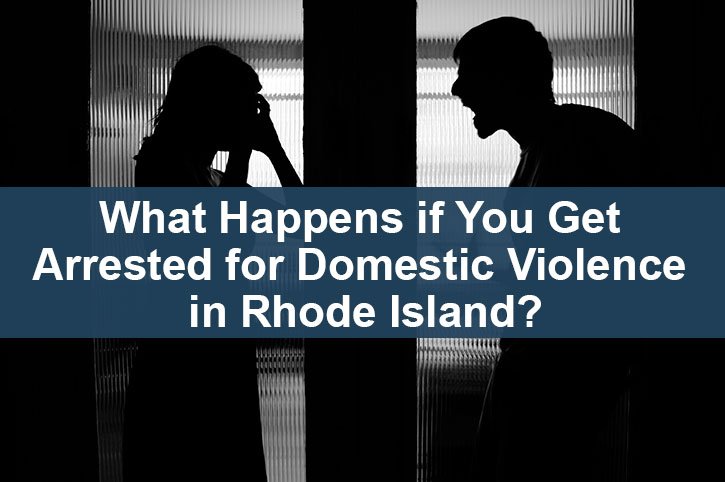 Having a domestic dispute can be a stressful, emotional, and trying time for a couple or family. When the pressure is high and emotions become overwhelming, conflicts can easily escalate. Before you know it, local law enforcement gets involved, and you’re being charged with domestic violence. You may be wondering what happens if you get arrested for domestic violence in Rhode Island and what steps will come next. First, it’s important to know that Rhode Island considers domestic violence to be a very serious offense, penalties can be severe, and protection of the victim is the state’s top priority. That’s why it’s important to contact an experienced criminal defense attorney immediately after you get arrested for domestic violence in Rhode Island.

What Classifies As Domestic Violence in Rhode Island?

Rhode Island places a crime in a domestic violence category when it involves: spouses, former spouses, adult persons related by blood or marriage, adult persons who are presently residing together or who have resided together in the past three years, and persons who have a child in common regardless of whether they have been married or have lived together, or if persons who are or have been in a substantive dating or engagement relationship within the past one year which shall be determined by the court’s consideration of the following factors:

What Happens After a Domestic Violence Arrest in Rhode Island?

If you plead guilty, the judge will sentence you and you’ll have to face the set penalties for the domestic violence felony charge.

If you plead not guilty, your bail will be set, a no-contact order will be issued, and another court date for your pre-trial will be provided.

Before you attend an arraignment hearing and enter a plea, it’s highly recommended to speak with a criminal defense attorney first. Domestic violence charges can be complex.

The complaining witness might have accused you of a domestic violence crime under intense and complicated circumstances. In many cases, after the dust has settled, a complaining witness may ask to drop the charges. Even if this happens, the charges do not go away and will not be dismissed. The state of Rhode Island will still follow through with your conviction.

As stated in the introduction, the charges for domestic violence range from trespassing and vandalism to kidnapping and homicide.

The penalties for these charges are severe on their own, but under the classification of domestic violence, see the Domestic Violence Prevention Act, the consequences can be even worse.

If you’ve been arrested for domestic violence in Rhode Island, contact the best Rhode Island criminal defense attorney for help.

Only a trusted and experienced domestic violence defense attorney can design a defense strategy, identify holes in the witnesses’ claims, and negotiate with the prosecutor to arrive at the best possible outcome for you.

How To Handle False Accusations of Domestic Violence

Having a domestic dispute can be a stressful, emotional, and trying time for a couple…