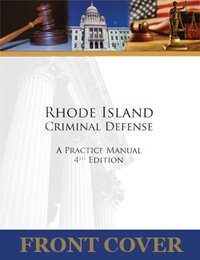 Impeachment with Prior Convictions

State v. Rocha, 834 A.2d 1263 (R.I. 2003). Trial justice deferred ruling on an advance Rule 404 motion in limine regarding the admissibility of defendant’s prior convictions for obstruction of a police officer for giving a false name, and for disorderly conduct and resisting arrest. Although defendant claimed that the lack of ruling prevented him from testifying and presenting witnesses for fear that the issue would come up on cross-examination, the court found that defendant could have proceeded cautiously with limited direct examination. R.I.S.C. affirmed.

State v. Silvia, 898 A.2d 707 (R.I. 2006). State was permitted to introduce evidence of defendant’s prior convictions for sexual assault, which used a knife, and other crimes, in trial for murder that arose from a fatal stabbing.

State v. Vargas, 991 A.2d 1056 (R.I. 2010). Defendant on trial for charges of child molestation could be impeached with prior convictions on four charges of possession of a stolen vehicle and federal charges of uttering and delivering forged United States Treasury checks, even though some of the convictions occurred almost twenty years prior. R.I.S.C. affirmed.